“Sexy” isn’t exactly a word you’d expect to hear coming from a toddler’s mouth, but that’s what Marie France Bodyline ad I shot when I was pregnant and told him, ‘Zed is inside [my belly]’, and after staring at it for a while he said, ‘Mama so sexy’,” Fann recalled, mimicking her son’s serious expression and drawing laughter from everyone around her.

Although she isn’t sure where he picked up his vocabulary from (we’ve got our money on his dad Christopher Lee), Fann said it isn’t strange for Zed to spout big words out of the blue. “One day he suddenly said ‘stethoscope’ and I was like [wide-eyed, shocked expression].”

Toggle was speaking to the 46-year-old actress at the grand opening of beauty centre BMF, for which she is their celebrity ambassador. Dressed in a one-shoulder top and shorts that showed off her enviably slender limbs, Fann expressed her excitement at having a place to come to for some much-needed “me time”, as it’s virtually impossible to get that at home.

“Before I became a mother, I had time to put on a face mask, but now Zed will come to me and cry, ‘Mama, mama!’ and pull off my face mask,” she said, adding that her 10-step beauty routine has been drastically reduced to the bare basics. 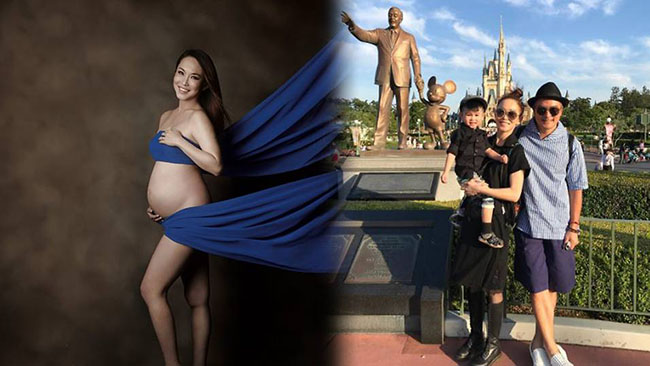 It seems like Zed becomes extra clingy when his mum sets out for some pampering. Fann also brought up a time when she went for a foot massage, during which Christopher planned to take Zed shopping while waiting for her. However, Zed kept calling for her, forcing a very defeated Christopher to bring him back to Fann. The little boy then fell asleep in her lap.

“I spend more time with him so he tends to cling to me more,” Fann explained. Still, that doesn’t stop Christopher from trying to compete with his wife for more attention from their son, which she reported happens quite often. “Every night when I’m reading with Zed, Christopher will walk in but gets ignored, so he’ll whine, ‘Oi, say hello to dad!’ (laughs)”

And it looks like Christopher may have passed down his possessive streak to Zed. Last month, Fann posted a hilarious video on Instagram, which showed Zed tenaciously forbidding his parents to kiss. “He will get jealous! He doesn’t even let his dad hold my hand,” she said. “I have to sit with Zed in the backseat of the car.”

Back in May, Fann, Christopher and Zed embarked on their first trip as a family of three to Japan, which was also Zed’s first time travelling out of the country (and in business class, no less). “We were worried because he’s a very fussy and reluctant eater, which gives us a headache,” Fann admitted. “All he wants is milk or porridge.”

To accommodate their child’s needs, the couple brought a slow cooker and all the necessary ingredients all the way to Japan with them. Christopher, whom Fann previously told us is “currently in chef mode”, volunteered to cook – but things hilariously backfired.

According to Fann, Zed refused to eat Christopher’s porridge for two days straight, and she quickly found out why when she tried the dish for herself. “It’s not nice!” she said with a chuckle. “Christopher insists that Zed is just picky, but even I couldn’t bring myself to eat his food. (laughs)”

Thankfully, Zed eventually opened up to trying new cuisine, as evidenced by a video of him gleefully devouring grilled onigiri on Instagram. Yum!

Can you believe it’s been eight years since Fann and Chris were last seen together on screen? Well, viewers will soon be treated to not just one, but two upcoming pictures starring the lovebirds, their first collaborations since tying the knot in 2009.

The first, movie Yi Nian (loosely translated as “One Mind”) – which was filmed in Beijing and also stars Qi Yuwu – is scheduled to open in cinemas at the end of the year, while WaWa-produced drama Doppelganger is slated for a 2018 release.

Fann declined to divulge further details about the latter show, promising to share more during the press conference to promote it next week. All she was willing to reveal was: “The script is very unique, so I believe that there will be a surprise element for everyone.”

In case anyone’s wondering how Zed has been faring while both parents are out of the house for work, Fann assured us, “My mum looks after him and he’s also quite attached to her, so everything is fine. At least I get to go home to him! It’s very different from filming overseas.”